The Venezuelan economy has collapsed in an unprecedented manner. The major problem faced by Venezuelans before COVID-19 was and still is hyperinflation. It has affected the lives and the living standard of all the Venezuelans. The Venezuelan bolivar has become worthless as a result the economy is in a downward spiral. The current president Nicolas Maduro is the legitimate president of Venezuela and the successor to Hugo Chavez. This economic freefall is not a complete fault of the current president Maduro but the seeds for these economic cracks were planted by late president Chavez.

Hugo Chavez was elected for presidency in 1999 and ran the administration till 2013. He became famous among the Venezuelans by upbringing the socialist government where there were maximum price controls to make the basic foods, clothes and needs affordable. The project was aimed towards poor people, as a result, he was hugely backed up by mass following of working-class Venezuelans. Because of this, businesses were not growing and flourishing. Businesses had to limit their production and found it less profitable to run the businesses which ultimately led down to low production or even shut down.
Similarly, Chavez fired 19,000 employees from Petróleos de Venezuela (PDVSA) during the strike of 2002 – 2003 and replaced them with employees who were loyal to him and his government. With this the experts at the field of oil were replaced by less competent employees, the oil company started deteriorating and the present condition is in turmoil.

Chavez was a hero in the eyes of many Venezuelans. He nationalized many programs and took over all of them. The sole purpose of the following activities was to expand the power of his presidency and be a favorite among the working-class people. Chavez took most of the agricultural lands in the name of food, security, and handed out subsidies. He created social services welfare programs for and all the funding for these projects were made when the oil prices were high. This costly mission was “Bolivarian mission”. His socialism government was all eyed towards people’s welfare but this elevated inflation. The mismanagement of resources, political incompetence, fiscal policies, and monetary discipline of Chavez’s regime further deteriorated the inflation rate. After his death, Nicolas Maduro became his successor but as oil prices started to go down in his presidency, the PDVSA couldn’t sustain itself and Maduro could not pay off all the spending done in Chavez’s era. To solve this evolving problem, Maduro printed more money which ratcheted inflation further.

The inflation rate of Venezuela for 2019 was disturbing 10 million%. The inflation rate per year between 2018 and 2019 has been roughly 70,000%. After Chavez’s death in 2013, Maduro’s government hasn’t been able to cope up with the huge spending done by his predecessor. With oil prices plunging in a devastating manner, the inflation rate has been going up and up in an unconditional manner since Maduro’s presidency.

The inflation ruined all the savings of the civilians and made the business investment impossible. Maduro’s government implemented plans to decrease this inflation by price controls but this made the situation even worse. Selves at the grocery stores are all empty with a shortage of food. Hunger is spreading every region of the nation. Hospitals are finding difficult to operate or look after the patients with a shortage of necessary medicine drugs and supplies. The official exchange rate set by the government is 10 bolivars per dollar but with bolivar, the currency of Venezuela, losing the value so quickly and rapidly, the free-market exchange rate is close to 4000 bolivars. 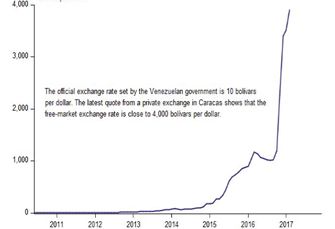 This imposed exchange rate of 10 bolivars is practically harder to maintain. As the Venezuelan currency is devaluing and declining, the Central Bank of Venezuela is finding it difficult to buy and sell the currency.
The Gross Domestic Product (GDP), current prices on the scale of billions in the year 2018 was $96.328. This contraction is occurring in an outrageous manner with $210.083 in 2017 and $236.116 in 2016. The percentage change in GDP at a constant price in 2018 was -18%. 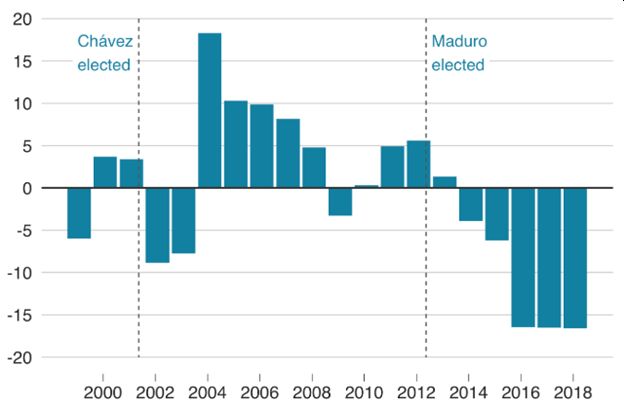 Between 2013 and 2017, the contraction of national and per capita gross domestic product (GDP) was more severe than the Great Depression in the United States or the collapse of the Soviet Union in Russia and Cuba. The protest has been going on since 2014 in the streets of Venezuela regarding inflation, but the government has been successful in suppressing the voices of the local people.

Despite a hike in the minimum wage, workers are still not able to make their ends meet. Workers will get a minimum wage of 150,000 Venezuelan Bolivar with the addition of another 150,000 food stamps. To trim down and calculate the expenses, a kilo of beef costs around 60,000 bolivar and a bus ticket costs around 2,000 bolivars. The grocery expense of 150,000 bolivar is enough for a single person but for a family of 3 or 4, the minimum wage is not enough. The wage along with the food stamps will not cover the other expenses like personal hygiene, gas, electricity, rent, and recreation.

Venezuela and its Oil Reserves:
Venezuela, a country hugely relying on its natural resource i.e. its oil reserves has one of the largest known oil reserves in the world. 95% of exports are made up of crude oil in Venezuela. The country once was regarded as one of the richest countries in South America. In 1973 AD, The Yom Kippur War in the Middle East led to a huge rise in oil prices. This drastic price raises benefited Venezuela and the Venezuelans. The economy grew rapidly providing the highest growth rate and the lowest inequality in the whole of the South American continent.

The oil production was at an all-time high with 3.8 barrels per day (BPD) and in 1976 AD, the country officially nationalized its oil industry forming Petróleos de Venezuela S.A. (PDVSA). Between (1974-1979) AD, the government spent more money than it had in all its history. But in 1983, the oil prices plummeted worldwide and that led to deep economic cuts and spending for nearly two decades. From the mid-2000s, oil prices started to rise, the export of oil maximized generating maximum revenue (Newsy, 2018). As oil is challenging to produce, Venezuela had invited many international oil companies and the government of Venezuela which ran under the presidency of Chavez made most of the revenue and demanded to change the agreements with other oil companies that were involved in the extraction. This gave PDVSA the majority of the control on the resources. The government later fired experienced PDVSA employees and took control over the oil projects of two foreign oil companies as well, Exxon Mobil and ConocoPhillips which was illegal and were later compensated for this act.

With experienced employees fired and government spending money on other projects and failing to meet the expenditure required to sustain the oil facilities, this caused massive step down in oil production for Venezuela. This low production of oil year after year is due to the crumbling infrastructure after failing to maintain the resources. Since the economic instability, the oil production facilities are not well maintained. The pipelines are deteriorating resulting in oil spills in the lake, natural habitat, and ecosystem. 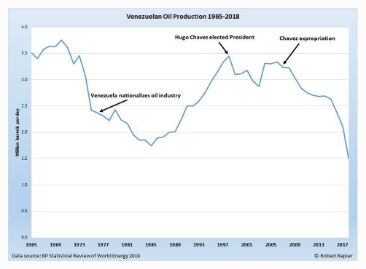 Similarly, the prices started to fall sharply as well. In the year 2013, the price was $100 a barrel but the following year in 2013, the price plummeted to $70 a barrel. The price decline continued aggressively with around $33 a barrel in early 2016.
With oil price decreasing and high maintenances required to operate the oil industry, the production has decreased significantly. As for 2018, the production of oil has plummeted more than 50% below and has fallen to 1.5 million BPD. 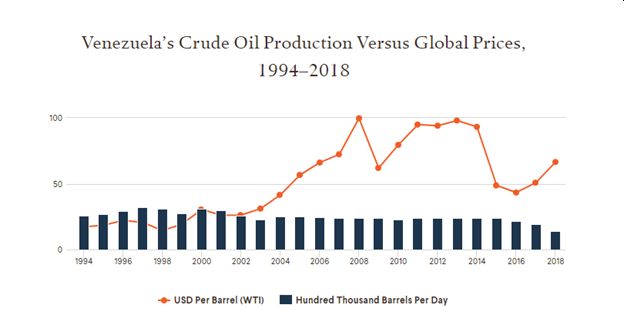 The Venezuelans are finding it difficult to live their lives. With inflation spiking, people are not being able to afford their basic needs. There is a hunger crisis all over the nation. People are forced to buy rotten beef because there is nothing to eat.
It is disturbing that people are starving and are facing a humanitarian crisis because there is nothing to eat. The lakes are all polluted hence fishing is very difficult. People cross the border to Columbia illegally and smuggle not drugs but fish and food supplies.

Some key findings on the hunger crisis in Venezuela are:

Because of the growing scarcity of food supplies and the hunger crisis, many Venezuelans have left the country to live a better life where they can afford their basic needs. It is reported that three million Venezuelans have left the country since 2014. Neighboring nations like Columbia who have taken 1 million Venezuelans as refugee have opened their border and their arms to help the refugees and supply the necessary aids. Columbians also have taken some Venezuelans with families into their homes as a homage when their country was in crisis and Venezuelans provided with necessary assistance 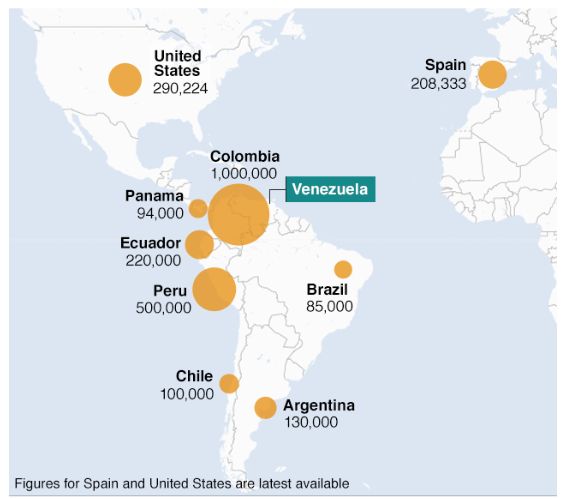 Lessons to be learnt
There is always a huge difference between utilization and exploitation. In the context of Venezuela, I believe that the country utilized its natural resource i.e. oil resources but exploited in a context where they failed to maintain the facilities. They extracted the oil and utilized all the money to invest in other welfare programs to make the president and his regime look better in the eye of the citizens. The Venezuelans benefitted from the welfare programs but lack of reinvestment in the oil industry has turned the tides making less oil production than it had before and hence there is a huge economic downfall in the nation. Similarly, in a macro level, heavily relying on a single resource is always dangerous.
Taking an example of the Middle East where most of the revenue was generated from the export of natural gas and oil. The Middle Eastern governments have reinvested the money particularly in tourism like no other. 50 million traveled the Middle East in 2014 alone and the region expects to receive 150 million tourists or visitors by 2030.